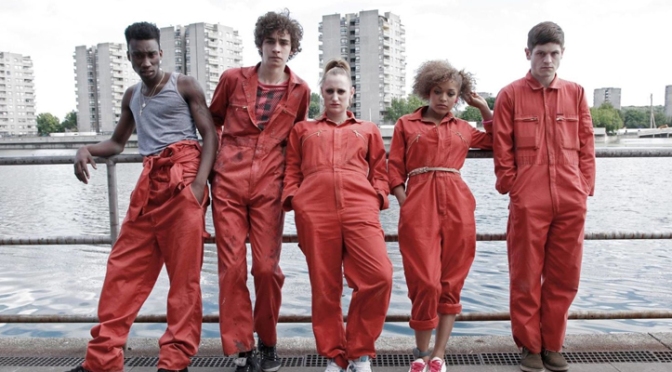 The Misfits are here saving the superhero genre from banality with wit and humour.

The superhero trend keeps a-rolling. The novelty of the genre seems to be fading. Popular originals are exhausted. Sequels fall back onto classic comic series for overused heroes and villains alike. Armed with a couple of good ideas, the freshly cancelled Heroes banded a refreshing gang, only to jump the shark early in the game.

Of course, there has been some successful *cough*Batman*cough* exceptions. But some new faces would be great to see. Enter the young Misfits, here to revive the tired genre and break the lasting monotony.

The series revolves around five delinquents, who wake after a storm to find themselves imbued with eccentric superpowers. Simon (Iwan Rheon) turns invisible, Alisha (Antonia Thomas) seduces with a mere touch, Curtis (Nathan Stewart-Jarrett) manipulates time and Kelly (Lauren Socha) reads inner thoughts. Rounding up the team is Nathan (Robert Sheehan), who… well, let’s just say he has the gift of comedy for now.

Misuse for misdeeds follows, though some would trade anything to give up their abilities. On the surface is a generic premise, made admittedly daft by the idea of a supernatural freak storm. But missing out on the series would be an easy mistake to make. The sharp entertainment turns heads with its dark and sometimes crass humour, with plenty of wit to offer.

From unexpected murders to unintended suicides – things get unpredictable and no doubt interesting. A team of excellent writers crafts cruel situations that never fail to blossom into worse scenarios over time.

Amid the absurd chaos, the characters start to overcome their struggles on societal sidelines and grow. Memorable dialogue is the heart of the bold adventure. An especially brilliant monologue awaits at its very finale. Such is thanks to the top notch gang of actors, who fit right into the shoes of their very likable personalities. All that, despite a shared penchant and surprising talent for crime.

Are we dismayed to find out that Misfits had gone into a long hiatus since 2009. Solace comes in the recent announcement that the series has been commissioned to return in November. It will be yet another 6-episode series, accompanied with a 60-minute Christmas special. Somehow, that doesn’t seem enough!