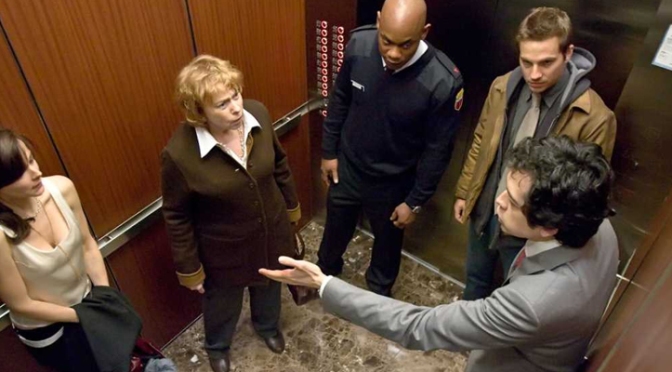 Devil (dir. John Erick Dowdle, 2010) – A group of people are trapped in an elevator and the Devil is among them.

Horror fans are in for a treat, should Devil be only the first of more to come from The Night Chronicles.

After a streak of brilliance in The Sixth Sense and Unbreakable, director M Night Shyamalan seemed to have lost his spark. While Signs and The Village showed his knack for suspense, senseless twists were starting to irk audiences. Things looked fairly bleak as disasters followed since Lady in the Water.

So it comes as a welcome change as Devil sees Shyamalan step away from the director’s chair. Quarantine director John Erick Dowdle takes charge of his small-scale horror film, working with a solid script from Hard Candy‘s writer Brian Nelson.

The minimalist story opens with the vast city landscape of Philadelphia, where a jumper leaps off a skyscraper to his death. In that very building, five strangers soon find themselves trapped within the confines of its claustrophobic elevator. Deaths start to occur with each power surge, and suspicion quickly turns them against each other.

Watching them through a live feed, security guard Ramirez (Jacob Vargas) claims that the morning’s suicide has triggered the presence of the Devil. But the cynic in Detective Bowden (Chris Messina) dismisses his superstitions and looks for his human assailant.

Hysteria takes over as the lift occupants reveal their proclivity for deception and violence. Confessions of shady pasts leave us uncertain of the Devil’s existence. As their mysterious identities come to light, the murders seem as likely to be supernatural as they are, criminal.

Horror relies on such effective ambiguity that builds atmospheric anxiety, leaving visceral gore as secondary. The simplicity of the concept works. Leaving the nature of their deaths inconclusive, the uncertainty conjures masterful suspense.

Their inescapable predicament sends genuine shivers down the spine, if only let down by pacing issues and a lacking pay-off, which feels all too predictable for horror veterans. But if this is any indication of what’s to come for The Night Chronicles, the tales from M Night’s crypt could get pretty interesting.