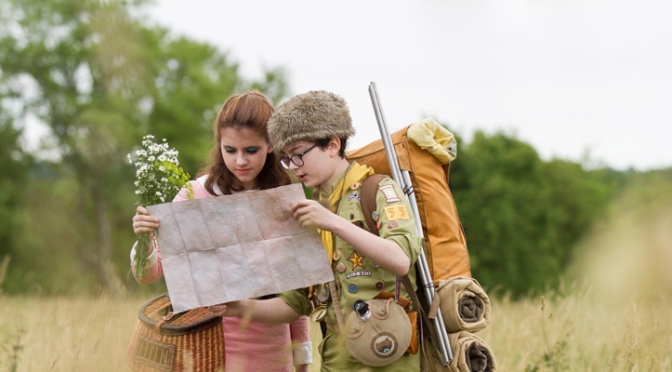 Moonrise Kingdom (dir. Wes Anderson, 2012) – In 1965, a young boy scout runs away on an escapade with his young lover, as the town mobilises a search party.

Take another magical trip back into Wes Anderson’s distinctive and fantastical world, where traces of bygone childhood and memories of first love await to be rediscovered.

Everyone needs to visit the world of Wes Anderson at least once in their lifetime. The auteur litters the ground with colourful characters and paints the sky with pastel colours of fantastical beauty. There is really no place quite like it. When it comes to an Anderson film, we are never just watching a movie. We are living a story.

Sometimes this cinematic experience can be too vibrant and bright, almost cartoon-like. It can be real yet somehow surreal, at times even absurd. His short career consists of just seven films, and in every one of them, it is difficult to draw the line where fantasy ends and reality begins. There is no doubt an arresting beauty to that.

Wes Anderson’s latest work Moonrise Kingdom plays out with the same distinctive visual quirks. Regulars like Jason Schwartzman and Bill Murray make their return, but they stand aside as supporting characters. Taking centre stage are a pair of young unknowns, who play young lovers taking their first steps into adulthood.

It begins in the home of Suzy, a lonely and misunderstood pre-teen who finds solace in her suitcase full of wonderful books. She meets boy scout Sam, an orphan who feels just as alone as she does. They both long for an escape from their lives, and desire an adventure bigger than themselves.

Despite the tint of fairytale-like surrealism, the characters and their motivations never stray too far from reality. Throughout the story’s gradual progression, we can each find our own emotional connection however tenuous with the two children. There lies the feeling of never belonging, in their nostalgic story of adolescence and innocent first love.

The comedic touch in occasional peculiar exaggerations sometimes serve to distract from the drama. But the innocent humour will bring a laugh, or at least a subtle smile. Attention to even the most minute detail rewards the most observant viewers.

Every bit creates an indelible impression with great wit and boundless imagination. Wes Anderson puts much passion and sincerity into every film he makes. Every story is clearly personal, close to his heart. It is easy to see where the charm lies, and there is something absolutely magical about it.