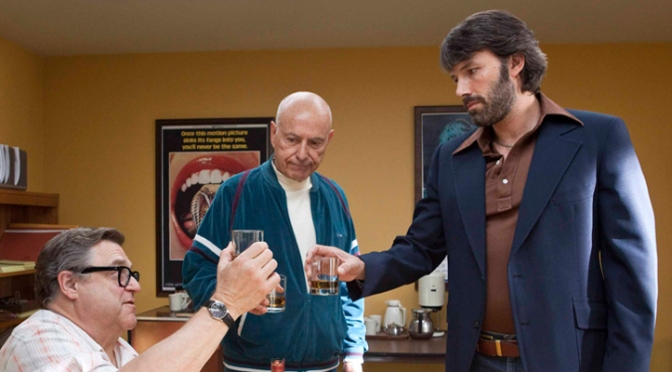 Argo (dir. Ben Affleck, 2012) -Based on the true story of the Canadian Caper, the CIA plans a covert rescue of six Americans from a hostage crisis under the cover story of Hollywood movie Argo.

Argo delivers a superb heart-racing dramatisation of the Tehran hostage crisis, while taking liberties with the truth.

At the age of 25, Ben Affleck claimed his first Academy Award for co-writing Good Will Hunting with Matt Damon. It would be a decade before we see his next screenplay and first directorial feature, with Gone Baby Gone. After delivering yet another intense ride with The Town, Argo sees him back on the directing chair, his track record inviting much well-deserved fanfare.

The true story is as insane as it seems. Against the backdrop of Iranian warfare, the CIA proposes a faux film production as the solution to an ongoing hostage crisis. This audacious premise mandates a difficult delicate balance between tension and humour. Taking on the daunting task, Ben Affleck succeeds with ease in delivering sharp Hollywood satire and tense drama in equal parts.

Paying meticulous attention to every detail, he devotes attention to developing both plot and characters. But characterisation is not the biggest challenge. With a prominent true story like Argo, the big spoiler has already been let loose in history. This runs the risk of some audiences counting the seconds towards the eventual happy ending.

Still, audiences remain at the edge of their seats, which is testament to Ben Affleck’s adept direction and acting as CIA lead specialist Tony Mendez. The solid script helps. Screenwriter Chris Terrio makes an impressive debut, presenting the complex chronology with smooth cohesiveness. There is an almost seamless blend of dramatisation and real events. The result, as thrillers rarely do, both affects and excites.

While dramatisation ups the ante, the cost is the downplay of Canada’s role in the rescue. This will see cinephiles happier than history buffs (and Canadians). Sequences like the pulse-pounding airport scene were invented specially for the film, thankfully for the actual escapees. But if the fictionalisation made for a much more thrilling finale, we are not complaining.

Beyond that, the credits offer an amusing look at the cast and their doppelgangers. Props to the amazing casting department on that end. Extra props to Ben Affleck for making this fantastic thriller, and above all, including that damn satisfying Led Zeppelin track.