The Theory of Everything (dir. James Marsh, 2014) – The biographical movie portrays the early years of accomplished physicist Stephen Hawking and his relationship with Jane Wilde.

Heartfelt and moving, The Theory of Everything sincerely portrays Stephen Hawking’s relationship in the face of adversity, one of many facets in his extraordinary life.

In 2004, BBC’s Hawking starred Benedict Cumberbatch in an understated performance as the titular scientist. The refined biopic chronicles Stephen Hawking’s early years – from his unyielding battle against motor-neuron disease, his persistence in scientific breakthroughs with preceding debates, to his loving relationship with Jane Wilde.

Ten years later, Eddie Redmayne takes on the same subject in James Marsh’s The Theory of Everything, another polished retelling of the famed physicist’s inspiring life. Despite their overlap in source, it is not easy to compare which film did better. Each had its own spots of brilliance in their respective recounts and memorable leads. 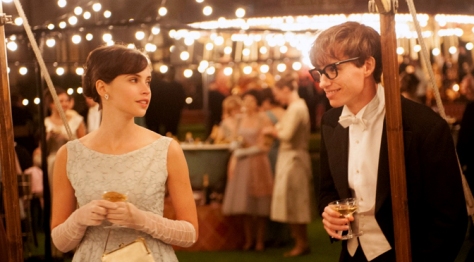 Tonally distant in its relent on science, The Theory of Everything homes in much further on Hawking’s lesser-seen marriage with Jane Wilde. Pushing his methodical work to a side note, the slant towards romance can seem a little dismissive of his impact and importance in the field of physics. But along with his amazing courage to survive, his love life is an equally deserving tale to be put to screen.

Based on Jane’s affecting memoir, the film settles into the early days of their relationship that soon faces a test, when Hawking is diagnosed with Lou Gehrig’s disease. Her strong will threatens to shatter, as his disease get harder to cope with over time. Growing loneliness and frustration begin to bear guilt. Notably, there is surprising honesty in her unconcealed struggles to stay devoted.

Her emotional stress is but all too relatable for caregivers, who are often afraid to show even the slightest quiver in their faith for recovery. Although not entirely unwavering – and understandably so, Jane inspires with her persevering tenacity throughout the years and commitment towards her husband out of selfless love. 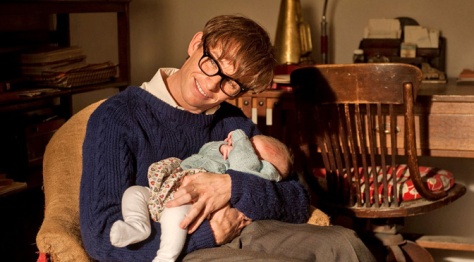 An excellent script neither neglects Hawking’s quips, nor does it shy away from discussions of his atheistic views. Clever visuals accompany. Intricate theories of physics are transformed into simple visual metaphors, from peas and potatoes to the swirling cream in a coffee cup. Underscored by Johann Johansson’s wistful notes on piano and strings, the shots match in unceasingly captivating beauty.

The glossy picture can at times feel like a cold portrait, but the cast makes up for the warmth that is thoroughly felt. Eddie Redmayne is phenomenal. Inhabiting his difficult role, Redmayne defies limitations of his portrayed debilitating physicality and moves with emotive eyes, reminiscent of Mathieu Amalric’s tremendous performance in The Diving Bell and the Butterfly.

As the determined woman who persevered against the odds, Felicity Jones impresses in equal measure. Strongly-written conversations and her nuanced interactions quietly reveal the subtle signs of their changing relationship throughout the years, and the complex deliberation behind each choice she makes.

It has to be said, that this is not just a love story. Going beyond the romance of the pair, love comes from the hearts of all around Stephen, in how his family never treated him much differently, how his close friends stayed by him, and how a stranger showed sincere care without obligation.

Mostly, what makes this an absolutely riveting watch is Stephen’s own enduring passion for science and his family, along with his conviction and courage to triumph over adversity. His truly remarkable spirit is what convinces us of his uplifting and powerful words: “Where there is life, there is hope.”