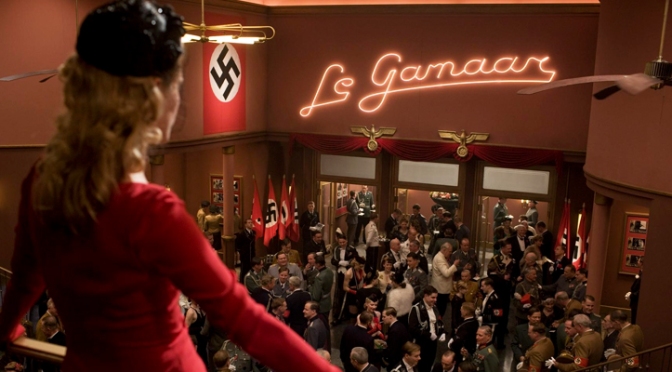 A Tarantinophile revisits Inglourious Basterds, a dexterously reimagined history of blood-spattered vengeance that proves just as entertaining as her first twenty viewings.

For every me who admires his works, there will be another one of you who clamours for his films to be dismissed as overrated, even obnoxious. But whether you loved or hated The Hateful Eight, there is little doubt that Quentin Tarantino is one of the most distinctive writer-directors out there today.

So not long after the credits rolled, I turn to revisit Inglourious Basterds. Years have passed, yet the first chapter to his vengeance trilogy remains a tremendous thrill ride, exemplifying how the familiar is made unpredictable by his craft.

From The Dirty Dozen to Rolling Thunder, Tarantino wears his influences on his sleeves, but never lets them overshadow what is definitively his own. The homage he pays is as much enjoyable as the conventions he invents – loquacious characters, self-referential jokes and the difficult precision of darkly funny moments. Set in times of war, few writers can lace a serious subject with humour like he does, without making light of a real brutal past.

The audacious dance begins once upon a time in Nazi-occupied France. Into the cabin of the LaPadites marches SS leader Hans Landa (Christoph Waltz) with false graces and ill intentions. Both a testament to Tarantino’s adept script and brilliant casting, Landa unnerves with words alone. Derision flows through his teeth behind the crooked smile of Landa, charming in his spurious humour yet cold in his timbre.

The colonel’s unambiguous suspicion terrifies, his inquiry catered more to his amusement than his need. Openings are rarely as tense as his pressing interrogation to hunt his victims. Orchestrated like a compelling symphony of destruction, quiet suspense gradually rises to its boiling point before exploding into raucous carnage, as Shosanna Dreyfus (Mélanie Laurent) helplessly bears witness to the Nazis executing her family.

Her palpable desperation grows into an infectious hunger for vengeance over the years. Shosanna’s opportunity arrives when a young German soldier Fredrick Zoller (Daniel Brühl) entrusts her theatre with Hitler’s movie première, unknowingly setting the dominoes to bring down the Nazi empire. Things quickly fall into place when others see a fitting place for their own plans to assassinate der Führer.

One resolute woman, a team of British spies and eight notorious Basterds form an unlikely circle of revenge, unified by a single mission. Starting off on different paths, the stories intertwine to present a coherently intricate Operation Kino. The many threads are neither tangled nor delicate in the hands of a good storyteller, who has repeatedly proven dexterity with unorthodox timelines and complex plots.

Behind the myriad characters is a huge international ensemble cast, each memorable and convincing in their motivation and vendettas. Be it the varied exploits of the heroic soldiers, the clandestine romance of Shosanna and Marcel (Jacky Ido), or the young Zoller trapped in loyalties of war, their stories linger far beyond curtain call.

Through the heavy air of pins and needles, the Nazi-scalping Basterds and the match-wielding heroine drive toward long-due vindication. Every bit of violence between is tinged with humour and death, with beauty.

At long last, the torturous thirst for revenge is quenched by a gratifying grand finale in a cosy Parisian theatre. Where Tarantino signs off his love letter to cinema feels just about right. After all, it is not just the people, but a film that finally wins the war. Watching the bold conclusion unfold is pretty dead satisfying in Tarantino’s fantasic version of a nouveau history.