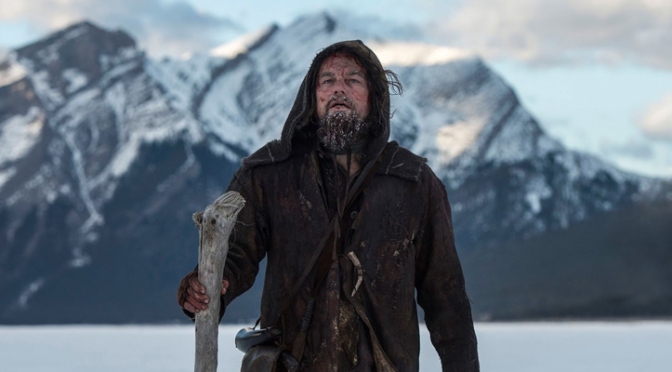 The Revenant (dir. Alejandro González Iñárritu, 2015) – Left for dead after a brutal attack, frontiersman Hugh Glass escapes his shallow grave and fights for survival in the wilderness.

In the 1820s, frontiersman Hugh Glass had his fur trapping expedition cut short when he was brutally mauled by a grizzly bear. His flesh mutilated and throat punctured, he was left severely wounded and incapacitated by the gruesome attack.

Convinced that he would not survive, his companions buried him alive in a shallow grave. Against the biting cold, Glass crawled back from beyond and back to encampment, in search of the men who had left him for dead.

Where fact ends and fiction begins is hard to tell. The tale of resilience and survival is extraordinary, its dramatic and almost unbelievable elements reading like an euhemeristic myth.

Rewritten for the cinema, The Revenant further fictionalises the historical legend, though never steering too far from what truly happened. The reported truth is fused with an epic revenge western to compelling effect.

The layered narrative sees Hugh Glass endure hell, bent on drawing blood from the instigator of his abandonment and the murderer of his half-native son. In turn, the native Americans cross paths as they hunt the fur traders down in search of Powaqa, a woman snatched from their village.

Upon the enemy, the natives unleash primal brutality and consequent relentless danger. Behind the copious violence, their complex motivations are grippingly provocative. Unlike Glass’, their war began far before that fateful day. A need for survival wrests the darkest instincts out of its victims, persecuted as a race since the second they were born into their skin.

All paths of vengeance are unforgiving and owe its wayfarer no return. Every bit of anguish in this knowledge in both parties is thoroughly felt. As Glass edges towards slaking his revenge, the tortures of the wilderness are as perceivable as his own bastille of guilt and resentment.

Raw savagery remains captivating in the hands of legendary cinematographer Emmanuel Lubezki. With extensive fluid motions, he paints tension as much as he does marvel. ‘Spectacular’ understates his indescribably beautiful and purposeful art, patiently crafted under impossibly difficult and harsh conditions. Also responsible for Children of Men, Birdman and Gravity among others, Lubezki deserves every one of the three consecutive Academy Awards under his belt, and more.

Coupled with the viscerally powerful vision of director Alejandro Iñárritu, The Revenant‘s visual artistry is practically flawless. It is storytelling at its best, if only with a script more memorable than perfunctory. Even so, a cast of strong performers made the most insipid proclamations authentic and the silence, meaningful.

As the gaps teem quietly with portent, the endurance test of a dragging pace eventually gratifies and rewards. Each onslaught of wrathful bloodlust is striking in its sudden volume, leaving behind impactful and darkly haunting echoes.