Its impact undiminished by time, Murder in the First remains a powerful narrative as the often ineffectual punishment of solitary confinement continues today.

When prisoner Henri Young stands accused of murder in the first degree, young lawyer James Stamphill (Christian Slater) refuses to see the case as a lost cause. Against advice, he exposes the inequity behind closed doors and boldly takes on a controversial opponent: the justice system of Alcatraz.

Prison warden Milton Glenn (Gary Oldman) lends a face to the iron bars, having sentenced Young to three years of solitary confinement in the name of upholding the law. He accepts his legal powers with few boundaries set, embodying the abuse of authority in question. Voluntarily blind to his inhumane and violent methods, his actions echo the real-life Stanford prison experiment that demonstrates how power endangers and corrupts. 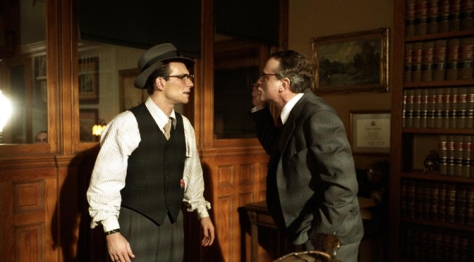 Murder in the First is largely a fictive account, not based off but inspired by aged news clippings. While the real Henri Young was a hostage-taking robber and a murderer, the brutality befalls on a more sympathetic victim in fiction.

Henri Young’s (Kevin Bacon) crime was stealing a measly $5, forced by the hand of poverty. On two occasions, the film insists, “He’s no Al Capone”. His predicament builds strong grounds for the complex case against a trusted public institution of authority.

In the dangerous undertaking to waver credibility in the State’s punitive power, public defender Stamphill shows no sign of retreat. He remains acutely aware of his own privileged position that juxtaposes with Henri’s indigent upbringing. The relationship Stamphill develops with the prisoner is inaudibly loud and impactful, calling to mind the contrastingly hapless victims who never had a second chance.

With this striking final film, late director Marc Rocco puts forth a thought-provoking commentary on the cruelty behind the unjustifiable punishment of isolation. Such mistreatment unfortunately is not confined to the one notorious cell in history. It persists today in spite of proven repercussions.

Albert Woodfox, recently released after a 43-year period of isolation, proves a shocking reminder of these forgotten prisoners. An undefined number worldwide continue to suffer the distressing and irreversible consequences of such state-sanctioned horrors, calling for an urgent need of global prison reforms.