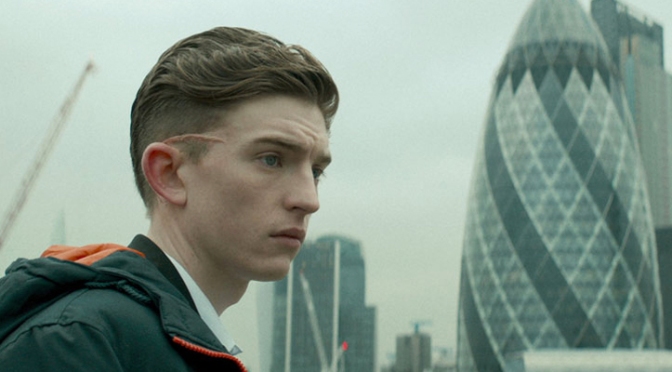 iBoy (dir. Adam Randall, 2017) – Left with fragments of his smartphone in his brain, Tom develops powers to manipulate electronics and begins his plan for vengeance.

In the real world, phone bits lodged near your temporal lobe will likely be incapacitating, if not fatal. It is quite fortunate that our victim lives in fiction then. And with an alias like iBoy, it is hard to expect anything less than ludicrous, as the young vigilante takes on the big mission to sweep the seedy corners of London.

That dated pseudonym belongs to Tom (Bill Milner), a brooding teen who witnesses a sexual assault on his classmate Lucy (Maisie Williams) and gets shot in his head. A nasty scar is not all he gets. Phone fragments in his brain render him able to connect remotely to nearby devices. Sort of like a human modem, if you’d like.

Back on his feet after a ten-day coma, Tom quickly learns of his powers. He can manipulate electronics and switch radio stations in random cars – just for kicks. In a serious turn of events, his cyber-hack attempt uncovers the identities of the local teen gang, responsible for the crime that hurt him and Lucy.

As his revenge tactics begin and escalate, Tom falls right down the rabbit hole and discovers more than he bargains for. Unwittingly, he makes an enemy of local kingpin Ellman (Rory Kinnear), landing his loved ones in vicious danger of the city’s sordid underbelly.

Exploding cellphones and Matrix-like skills acquisition follow. Daft? Probably. But the Netflix film’s title alone should be indicative of what you leaped in for. Besides, an excellent cast makes for rather decent entertainment. Let’s face it, Maisie Williams is likely the main reason why this was even on your watch list.

Paying no mind to deficient logic, iBoy settles in gritty realism. The thriller goes all-out on language and violence, echoing the much superior Attack the Block. Some well-written dialogue is let down by a lacklustre confrontation, which never quite exceeds the threat of an age gap between Tom and his powerless adversaries.

And so the formulaic film sprints through the motions of conflict and moral dilemma, topped off with a little cheese in its eventual resolution.

More wit and humour may have done this run-of-the-mill adventure some good. But with neither distinct style nor compelling characterisation, the urban adventure feels naggingly familiar and hardly leaves a mark.

Thank goodness iBoy does away with cliffhanger endings, and it is unlikely we will see his return any time soon. A single chapter seems just right for what it is. But if there is any chance you may want him to stick around, you know what they say about superheroes. These guys always come back in one form or another.