Rooster’s Blood / La Sangre del Gallo (dir. Mariano Dawidson, 2015) – Beaten and bloodied, Damian is unable to remember how he got there, or why.

This moody kidnap thriller is as much an engaging mystery as it is, visual panache.

If you have a thing for gritty thrillers from the independent scene, La Sangre del Gallo will be right up your seedy alley. A promising directorial debut by Mariano Dawidson, the Argentinian film foregrounds the dark brutality of criminal underworld, uncompromising in its show of violence from the get-go.

The opening introduces Damian (Santiago Pedrero) in a bad place, captive and bloodied during an iron-fisted interrogation. Questions and punches rain without relent. Still, his past remains a blur. As he struggles to recall painful memories, the age-old narrative device of flashbacks serves well to unravel the mystery at hand.

The continuous assault may imply chaos, but the minimalist thriller turns out taut and focused. An intimate affair is revealed in Damian’s search for his biological father, known only as del Gallo, or The Rooster (Eduardo Sapac). Secrets of his past come to light piecemeal in his impassioned journey, in search of his identity during a time of loss.

An assured visual style is the chief draw of the film. Director Mariano Dawidson builds a rich sensory experience with noir influences, lending hypnotic ambiguity to Damian’s state of mind. Budget appears to be of minimal constraint. There is almost a scarred quality to the neat editing, as his recollections return in fragmented form.

Visually accomplished, La Sangre del Gallo proves another unmissable gem of genre fare with its gripping atmosphere. This is also in part due to Santiago Pedrero’s mesmerising lead performance. Through his damaged character, he channels his emotional turmoil through in pulsing and almost tangible terms.

To a stirring orchestral and sometimes grating soundtrack, effective intensity escalates. Even though the trite ending feels inadequate after all that pent-up tension, it is undeniable that the raw emotions ring true, and last. 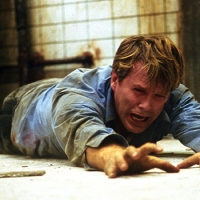