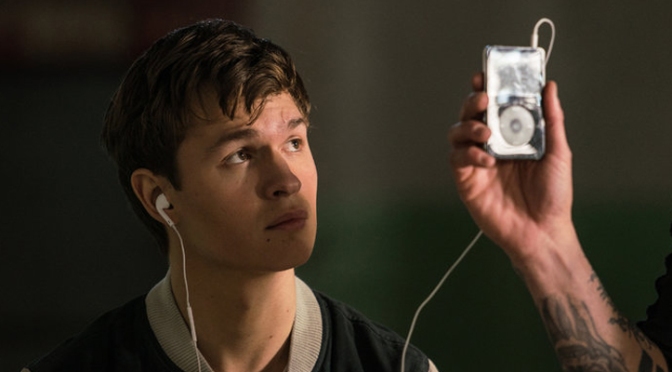 Baby Driver (dir. Edgar Wright, 2017) – Deep in debt, a young getaway driver is coerced into working for a criminal mastermind, whose incrementally dangerous heists put him in a tough spot.

Driven by stylistic action, Baby Driver would more than please thrill-seekers who habitually set soundtracks to every little routine.

Baby Driver may seem like a novel concept, but it seems Edgar Wright has been building up to his rhythmic caper film all along. Back in 2002, he has already tinkered with the idea in his music video for Mint Royale’s Blue Song, starring Noel Fielding, Nick Frost, Julian Barratt, and Michael Smiley (whom I only wish were in this film):

His subsequent works have snuck in more than a few musical moments too. A standout scene in Shaun of the Dead saw scrimmage attuned to Queen’s anthemic Don’t Stop Me Now. Hot Fuzz introduced Sergeant Nicholas Angel to the addictive beat of Adam Ant. Not forgetting how Scott Pilgrim, well, launched the short-lived fictional career of Sex Bob-omb.

So it is unsurprising that his next project would own an equally killer soundtrack. Not content with stirring song choices, his latest stylistic adventure finds the visuals to match in a genre purely fuelled by excitement. Once the film opens with a getaway drive perfectly synced to Jon Spencer Blues Explosion’s Bellbottoms, there is no question that the audiences are in for a real treat.

Behind the wheel is laconic driver Baby (Angel Elgort), coerced into a life of crime under mob boss Doc (Kevin Spacey). His troubles with tinnitus cleverly account for his fixation with music, its seamless integration flaunting the impressively precise timing of editor Paul Machliss.

Firepower matches drum beats, as Baby plays through stolen iPods and mix tapes in his slickly-edited close encounters. The Damned’s iconic bassline has never played a more important role on the road. From the tracking shot choreographed to Bob & Earl’s Harlem Shuffle, to an inspired use of Queen’s Brighton Rock, the eclectic song mix are faultless. The fun is infectious.

Where there is no music, constant ringing takes over. Such attention to minute detail owes to a brilliant sound design team, who deserves props beyond their technical prowess. While their work risks the label of style over substance, this focus on audio and visual harmony endows the film with a necessary striking personality of its own.

His romantic subplot with Debora (Lily James) never quite worked either, void of chemistry that has worked better in classic crime films like True Romance and Bonnie and Clyde. Still, Baby Driver earns its emotional weight in other forms.

Most of which comes from Baby’s relationship with his infirm foster father Joseph (CJ Jones). In him trying to share Baby’s love of music through the pulsating speakers despite being deaf, these subtleties are beautifully written and heartfelt. It is this earnest warmth that elevates Baby Driver beyond a mere technical gimmick, as Wright presents with sincerity the most entertaining cinematic joyride in years.