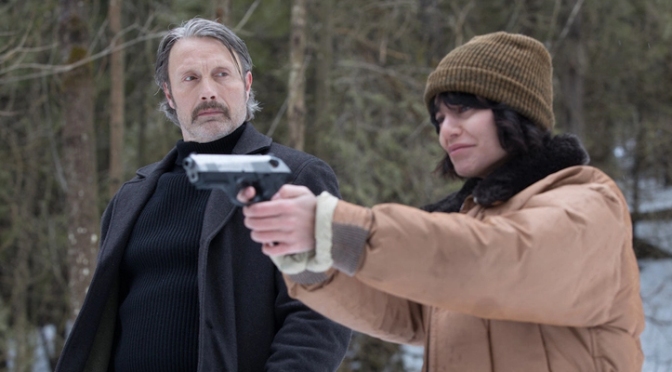 Polar (dir. Jonas Åkerlund, 2019) – Hitman Duncan Vizla is about to go into retirement, but his employer has no plans of letting him settle down in peace.

Emotionally distant and distractingly explicit, Polar may leave one feeling ice cold following the heat of the action.

Former musician Jonas Åkerlund has long since established himself as a big name in the making of explicit music videos. Known for his unbridled depiction of sex, drugs, and violence, the man was responsible for the party visuals behind Rammstein’s Pussy, The Prodigy’s Smack My Bitch Up, and other aptly named greatest hits.

Who then would expect anything more from him than a no holds barred show of exploitative hyper-violence and abundant butt close-ups? It is indeed no surprise to see Polar serve up another one of his trademark cocktails, where the hard-R trinity shows up in gratuitous excess.

At the centre of the chaos is Duncan Vizla (Mads Mikkelsen), more formidably known as the Black Kaiser. The man is a week away from his retirement and struggling to picture his future without murders. But his employer Blut (Matt Lucas) has other plans in mind.

Intending to usurp his pension, Blut sicks a team of young ruthless assassins on his best asset, forcing him to hide out in the cold of Montana. There, Duncan forms a bond with young neighbour Camille (Vanessa Hudgens), whom he inadvertently endangers with his fatal lifestyle.

Potential wanes as Blut’s plan for pension fraud leads nowhere near any ploy of depth or nuance. Instead, the set-up is but a kick off for the senseless brutality and sensuality, which litter the web-comic adaptation from start to finish.

In the hunt after Duncan, it would be fair game to point out some of the action is on top form. Unfortunately, the frenetic edits and shaky shots left the fight choreography in sweeps of blurs. Flak is also in order for the thinly written and emotionally distant characters, which barely make the two-hour film worthwhile.

It is a shame, for the acting shines. But an uneven tone swings Polar between the extremes of dark comedy and melodrama in excessive motions, making it tough to feel during the latter. It is nothing like the fun of Kingsman and Wanted, which never took themselves too seriously.
Rather, Mads Mikkelsen radiates his usual gravitas that is strikingly dissonant with this film’s total absurdity.

How hard it is to reconcile the existence of his tragic hitman and Matt Lucas’ caricatural madman in the same universe. But when it comes to Akerlund’s mad mad mad mad world, it may be wise to loosen the rules, if only for the sake of a little mindless entertainment.