This month, I’d picked up two novellas by my favourite writers with high hopes. But the book I enjoyed reading the most turned out to be the work of an author completely new to me. So here’s to exploring more diverse voices this month. Thanks for reading, as always. x

All things are chance. Nature is chance. Life is chance. It is a human madness to cry and find rules where there are none, to invent constraints where none exist. The only thing that matters is the choice. So choose.

Every political strife is in sum, a game. The Serpent takes that statement rather literally, turning the city into a chessboard and its people, pieces. The mystery is as fascinating as it sounds, and the first chapter of the trilogy unfolds in satisfying terms.

Such is the ingenuity of Claire North (Catherine Webb), who shows yet again her refusal to conform to tropes and archetypes. Though not entirely immersive due to the sheer complexity of ties and strategies, it is worth a read for originality alone. 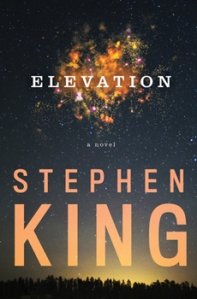 Time is invisible. Unlike weight. But maybe that wasn’t true. You could feel weight, yes – when you were carrying too much, it made you ploddy – but wasn’t it, like time, basically just a human construct?

Sometimes I forget that Stephen King writes more than just horror stories. And when he does venture beyond poltergeists and axe murders, things can get much more interesting, as it did in this novella.

Elevation is one such fascinating read, light both in length and subject. Levity is not its strength for the simplistic plot soon meanders and falters. But its grounded nature also lends much food for thought. As Scott Carey’s weight drops at an alarming rate, the looming sadness of his fate turns out surprisingly uplifting.

The Luminous Dead (by Caitlin Starling, 2019)

There was a reason, after all, that cavers could demand enough money that they’d be able to get off-world after only two jobs, maybe three. Too many cavers didn’t make it that long. Just one of the many reasons Gyre was going to do it in one.

Gyre had known that the expedition she signed up for was dangerous, especially when she had gotten the job with nothing but falsified experiences. But when her handler Em reveals seeming instability and a tendency to manipulate, she realises it wasn’t just her inexperience or the tunnelers that she had to fear.

While The Luminous Dead starts off slow, the wait is well worth it. Tension soon rises as claustrophobia takes over. Stranded not just within caves but her suit, Gyre must often relent for survival and soon struggles to hang onto her autonomy. It feels exhausting just imagining her predicament.

Things get harder with her handler, Em, whose secrets ebb away at what little trust they have. But despite the weight of the pressure, love gradually and credibly grows out of their mirrored lives, bringing light into dark.