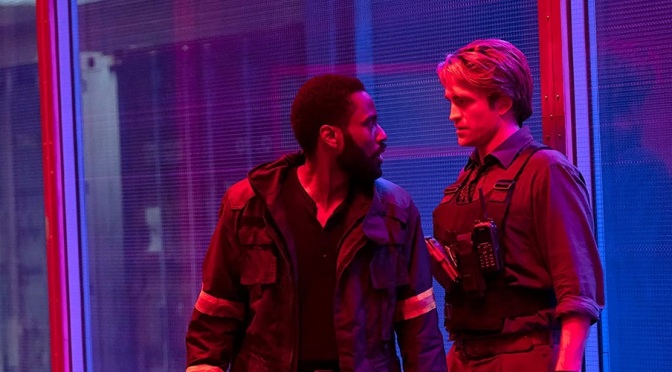 Tenet (dir. Christopher Nolan, 2020) – A CIA operative takes on a mission of international espionage, only to find it unfolding beyond real time.

Christopher Nolan loves toying with time. Linear narratives, it appears, do not interest him.

In Memento, his amnesiac character lives out his mystery in both forward and reverse chronology. With Inception, his measurement of years varies with every layer of the dream world. Interstellar has Nolan going deeper, working with theoretical physicist Kip Thorne to firm up the science of his wormholes.

Tenet seems a natural extension of that same obsessive exploration. His new film yet again tinkers with the written rules of time by introducing head-spinning unknowns. With Kip Thorne back by his side, the pair boldly questions, what if we could invert everything around us? What if we could walk through our world as it moves backwards in time?

An unnamed CIA operative (John David Washington) looks just as baffled when he witnesses a masked man reverse a bullet through its victim.

“Don’t try to understand it. Feel it,” he, and inadvertently we, are told.

Cryptic answers meet his questions, the absence of proper explanation unsurprisingly irking most people. Our Universe is after all governed by set rules. It is in our nature to discredit things that make no sense with our current understanding of how the world works.

But just as Nolan insists through the words of his Protagonist, you have to start looking differently at the world. Most sci-fi fans have a understanding of time travel logic, at least in films. This isn’t that. As with every new idea in his previous ventures, we must re-learn its mechanics.

It takes letting go of the rules we know, to acclimatise to his new universe of inverted entropy and temporal pincer maneuvers. The terms if they sound too foreign, are of little importance. Exposition and clever visuals make the broad strokes easy to grasp, and sufficient for one to follow the story.

That is even if the science has to be left aside for future dissection. (There are always Reddit sleuths to do the job for you.)

Circumstance forces the Protagonist to get the hang of it, fast. He learns his mission that he must stop the weapons from falling into the wrong hands and thus, prevent the world’s end. Teaming up with his local contact Neil (Robert Pattinson), he traces the inverted ammunition to its source.

Soon, he becomes entangled in a three-way conflict between an arms dealer Priya (Dimple Kapadia), an angry Russian oligarch Sator (Kenneth Branagh) and his art appraiser wife Kat (Elizabeth Debicki). Complicating matters is the latter couple’s abusive relationship, which stirs up the Protagonist, making his professionalism that much harder.

The plot line, key to preventing armageddon, lends the heady science fiction a more emotional turn that invites empathy for Kat’s predicament. It is an escape from the cold science that have driven the film so far.

Where there is heart, there is excitement too as the concept takes action to the next level. Cars race along the highway, backward and forward in time. Full out warfare sees buildings explode and un-explode. The set pieces play out in carefully choreographed, stunning motion, set to Ludwig Göransson’s pulsing score that leaves one breathless.

Granted the dialogue does struggle to compete with the constant loud humming, a problem exacerbated by mask-wearing characters. Thankfully, local theatres offer subtitles for most mainstream releases, allowing the action to unfold without much confusion.

The most exciting scenes mostly begin with the Turnstile, a machine that allows the Protagonist to invert while co-existing with his original forward-moving self. Paradoxes surface, leaving pedantic viewers scrambling for resolution.

When half the time is spent trying to get the logic of a complex idea, it becomes difficult to invest in the story entirely, even in its more emotional moments. At least, not for the first viewing. The convoluted ideas lend a valid reason for revisits, each time marvelling at the innovation accomplished by Nolan, who is never afraid to dream a little bigger.