Our favourite month of the year is here! Well, let’s face it, October isn’t even a real month. It is nothing but days to Halloween, which means a valid excuse for an entire month of horror movies.

While 31 days of consistent posts seems ambitious for me, I have lined up a few reviews for my own teeny horror-thon, Preamble to Halloween. For those of you who have committed to your own Spooktober features, do drop your links below. There’s nothing I love more than reading about my favourite genre.

Back to the books front, it has been a while since I was able to finish 5 in a month. My new Kobo reader, a birthday present to myself, has made late night reads much easier. May the novelty never fade. To my fellow bibliophiles, here are my reads of the month.

Evil comes from elsewhere, Matthew Houlihan believes. Evil is other people. She will leave him this illusion, mostly because she envies his ability to keep finding comfort in simple, black-and-white views of the world.

Strange doesn’t begin to describe The City We Became. The surreal fantasy sees a motley crew embody the boroughs of New York and take on each’s varying personality, quite literally, embracing the diversity that makes the city what it is.

Politics and cultural issues often seep into the midst of action, its villains representing the fear of the Other. From blatant trans and homophobia to Lovecraft’s infamous racism. The insertion is interesting though unsubtle, which stands in stark contrast to the nature of the book’s metaophorical concept. Still, the story speaks truth through strongly crafted characters.

No doubt Americans may get a bigger kick out of the specific references to their home. Even so, author N.K. Jemisin personifies the boroughs vividly enough for others to picture what they are like and feel their very souls. This is truly stunning original work.

When you read about crimes so uncomfortably perturbing, understand they are only fiction, still become unsettled by just how disturbed the perpetuators are, but are unable to look away from the wreckage. That.

Good Samaritans makes any inch of emotional damage worthwhile, going to dark places and does so mesmerisingly. The characters are key. Interestingly, the story keeps the detective on the sideline, contrary to expectations. It is the criminals that continually keep us on the edge and uncertain of what’s next in line.

Writer Will Carver masterfully dissects their twisted minds. He pens their observations, grounded in slices of reality. Carefully constructed, the characters draw sympathy and hate all at once, inviting us into their dark thoughts that we loathe yet yearn to learn.

Chase Darkness with Me: How One True-Crime Writer Started Solving Murders (Billy Jensen, 2019)

The world didn’t need another story about the Zodiac Killer or Jack the Ripper. The murders in the shadows add up to a hell of a lot more than the murders in the spotlight. The shadows are where I need to tread, because that’s where the problem lay. The blood of the forgotten was just as red as the “famous” victims.

Many of us spend time diving into unresolved mysteries on online forums and Netflix documentaries. Few devote their lives to actually solving them in the real world.

True crime novel Chase Darkness with Me is journalist Billy Jensen’s rally for more Internet sleuths to step up on working the myriad cold cases. It is also a display of his dedication to finding answers to crimes that never get a second look.

The fascinating read elucidates the unseen, tedious process behind each headline that spells closure, while bringing to light the justice left unserved in most cases. Most interestingly, it shows the power of social media and genealogy when used for good.

The Killer Across the Table: Unlocking the Secrets of Serial Killers and Predators with the FBI’s Original Mindhunter (John E. Douglas & Mark Olshaker, 2019)

Man is not fully conditioned and determined but rather determines himself whether he gives into conditions or stands up to them. In other words, man is ultimately self-determining.

David Fincher’s Mindhunter is a phenomenal series, but nothing beats reading the firsthand accounts of John E. Douglas’ fascinating interviews in The Killer Across The Table. It is extraordinary to be able to learn about the criminal mind through the words of the killers themselves. Even in their deception, therein lies a sliver of truth, sometimes drawn from between the lines.

What a shame that the transgressors are often the ones whose names are remembered. It is criminologists like Douglas who deserve more recognition for their incredible work in uncovering this truth. Their insights of what drives humanity to unimaginable depravity, is one massive step towards eradicating preventable tragedies. 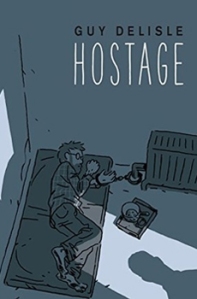 One night in 1997, Doctors Without Borders administrator Christophe André was kidnapped and kept in solitary confinement. He was left with no clue to why he was cuffed, and no end in sight. Through gripping visuals, the graphic novel Hostage tells the true story of his 3-month imprisonment, detailing the aching tedium of each day, where his brief escape into fantasy never feels long enough.

The absence of conflict is fortunate for Christophe, though not for his narrative. The relative calm of his hostage days becomes repetitive and lasts the majority of the pages. Day turns to night turns to day. Only with his escape does the pace pick up as he saves himself with nothing but admirable courage.