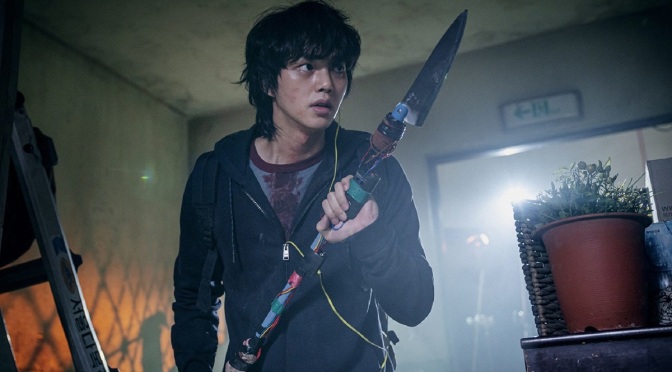 Sweet Home / 스위트홈 (by Lee Eung-bok, 2020) – A suicidal high school student re-evaluates his decision when he comes to face monsters trying to wipe out all of humanity.

After losing his family and endured months of brutal bullying at his high school, Hyun-su (Song Kang) was ready to end his life. Or so he truly believed, before a horde of monsters begin to infest the apartment building he lives in. Realising how much he wants to live after all, he finds his new purpose to survive, if only to protect the lives of others.

Adapted from the viral webtoon of the same name, Sweet Home may sound like Hyun-su’s coming-of-age story. But the sprawling series goes far beyond his personal journey of self-discovery. The teenager shares the spotlight with several residents of Green Home, each with their own compelling story to tell.

Some come with interesting skill sets. Devout priest Jung Jae-heon (Kim Nam-hee) reveals his dexterity with a jingum (only the coolest martial arts sword). Wheelchair-bound Han Du-sik (Kim Sang-ho) manufactures his own homemade arsenal like a regular Tony Stark. As it turns out, they even find a medic in their midst – in the young de facto leader Lee Eun-hyuk (Lee Do-hyun).

Mystery accompanies the aspiring army. Firefighter Seo Yi-kyeong (Lee Si-young) hides her past in the Special Forces that not only presents an excuse for spectacular fight choreography, but may have a little something to do with the monsters. Pyeon Sang-wook (Lee Jin-wook) also bears heavy secrets behind both his scars and apartment door, where his captive may very well deserve his wrongful imprisonment.

Other survivors live more ordinary lives, leaving many unprepared for the brewing violence. The fight is tougher still, given that many of these monsters were once human. When the residents realise this and that they themselves may become monsters too, they face a moral dilemma – to protect the lives of their own or that of others.

Eventually, almost every one of them finds their moment to step up, regardless of gender, age and background. The excellent characterisation makes every episode a gripping and emotional watch. It is easy to fall in love with (most of) these grounded characters and feel for their growing friendships, such that their unexpected heroics often lead to tears.

Humanity barely outshines the variety of monsters, birthed by stunning creativity and grotesque imagination. Each is designed to represent the deeply entrenched desires of the men and women they once were. The beasts rival the creations in the likes of Resident Evil and Silent Hill, owing to a phenomenal special effects team that hails from South Korea as well as the United States.

As we stare in awe and disgust at the beastly terrors, there is no doubt wonder as to how and why they had emerged in the first place. No horror sci-fi narrative would be complete without its origin story of evil conglomerates. Towards the end, Yi-kyeong spills the skeletons in her closet that may offer some answers – if only in the next season. The cruelty!

Sweet Home serves up bloody carnage that never detracts from its moving story on what being human means, told through the monsters they face.

Sweet Home is now on Netflix.