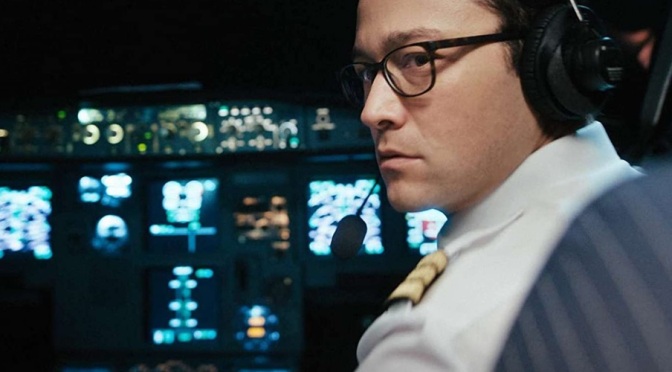 7500 (dir. Patrick Vollrath, 2020) – Terrorists hijack a Berlin-Paris flight, where a pilot is forced to make tough decisions to save his crew and passengers.

No long shots, no scenery, no distractions. Nothing but acting and words. It takes one hell of a performance to make single-location films work. Anchoring 7500 is Joseph Gordon-Levitt’s in the role of co-pilot Tobias Ellis, with just a locked door separating him from the ruthless hijackers.

He wasn’t alone. Not at first. Before he managed to lock the door behind, one hijacker had stormed his way in with a glass shard in hand. It took Ellis all he had to knock the intruder out, barely escaping with a badly injured arm.

Captain Michael Lutzmann (Carlo Kitzlinger) wasn’t quite as lucky. Ellis’ only companion slumps in the front seat with a fatal wound. All that he has left are two unconscious bodies. And his fear is palpable.

With no one to turn to, he watches his crew through the security cameras, helpless. The footage plays out silently. But shouts and screams come through the closed door, muffled but audible, close but unreachable. His pleas fall upon deaf ears as the terrorists carry out their fatal threats.

There are no Hollywood action heroes here. Ellis breaks down just an ordinary man would and makes us feel every bit of his desperation. Joseph Gordon-Levitt’s performance – one of his many career-bests, is what keeps the thriller credible and gripping within the walls of his cockpit.

Behind his steady portrayal is an equally outstanding crew ensuring that the backdrop lends extra authenticity. Hovering over the cramped space, the camera’s maneuver takes mere seconds, inducing claustrophobia in the bravest. It certainly helps that part of the production budget went to an actual Airbus for the set. (Mr Saito, is that you?)

7500 would have been almost perfect, if only it did not lean in so close to dangerous stereotypes. The intent did not seem malignant, as one of the hijackers reveals his reluctance and circumstance.

But this attempt at justification feels perfunctory. After all, it is hard to sympathise with complicit criminals, when we are offered little clue to who they once were. In this, the single-location concept shows its limitations. Nonetheless, it remains the film’s greatest strength.

Claustrophobia ratchets up tension within the confines of four walls, where a taut thriller needs little more than an outstanding cast and crew.